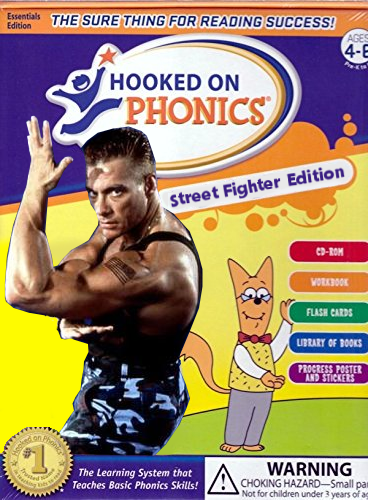 Street Fighter is a wildly popular video game series- can you guess what it’s about? If you answered “Street Fighting”, then congratulations son, you’re literate!

Street Fighter 2 had a loose storyline following a worldwide fighting championship. You could pick from a large cast of fighters, and pummel your way all the up to a maniacal tyrant known as M. Bison. The great thing about all the characters is that they were perfect stereotypes of their country. E. Honda is from Japan, and he’s a sumo wrestler. Zangief hails from Mother Russia so naturally he’s a bodybuilder. Blanka, the Brazilian contender, is the only one who defies stereotypes- unlike anything Brazilian, he’s covered in hair. And he’s green, but that’s neither here nor there.

Street Fighter 2 is the most notable entry in the series, so when the studio decided to make a Street Fighter movie, it was an obvious choice to adapt their most profitable iteration.

And that’s when the studio started messing up.

The movie was a total mess, for a variety of reasons, though one main reason has always stood out to me. The character Guile in the games is an all-american hero. He has platinum blonde hair that stands up straight, he’s in the Air Force, he has two American flag tattoos… he was America!

And then the studio got Jean-Claude Van Damme to play him.

My main problem with Street Fighter the Movie is that the most outspoken American character in the history of media is played by someone who barely seems to be able to speak English. He struggles his way through the movie, with a clunky script hardly helping his case. Luckily, this culminates into one fantastic moment towards the climax of the film. After being beaten by M. Bison and forced by his higher-ups to surrender, Guile gives a rousing speech to his comrades- he needs to inspire morale and turn the tide. He stands at the podium, a crowd of his soldiers gathered, anxiously awaiting his next words. Then he speaks.

In retrospect, I should’ve bought the Collector’s Edition of this movie, because it comes with a poster, some stickers, and a Rosetta Stone so I can attempt to understand what the hell he says in that speech.

If that’s the cut that made it into the final film, where were all the one’s deemed not good enough? Maybe two of them were accidentally switched?

The more intense the speech gets, the harder it is to understand.

“…I’m nut goen hom. I’m gonna get on my boht… and I’m goeng up-reever, en I’m going to kihk… that sonofabitch Bizun’s ass so ORDT! That the next Bison wallaby… is gonna fill et.”

Sometimes at night I’ll be laying in bed, content to drift into oblivion, when I hear Jean-Claude Van Damme shout “SO ORDT!” and I know that I won’t be able to sleep until I watch the clip again.

I have plenty of other complaints about the movie I’m sure I’ll address later, but for now it felt important to share this.

The Worst Movie Speech Of All Time.