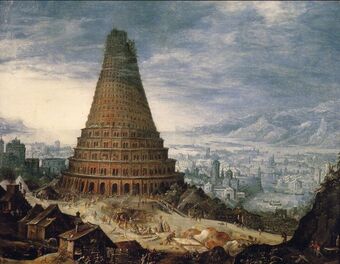 A little over a year ago I contrived a five year plan that was structured around using a million dollars to overthrow the Vatican and make myself Pope.

In hindsight, this may have been a bit childish.

I’d like to make a few amends to my original plan, mostly because I gave myself five years to gather a million bucks and I’m currently only .004% of the way there, this will buy me a little more time. Here’s my updated five year plan:

Becoming Pope was child’s play, I’m shooting for the big leagues now. God used to be so present, all of 2,000 years ago. Haven’t heard from you in awhile Dad, hallowed be thy postcards from two Christmases ago. I’m far too emotionally inept to confront my actual daddy issues, so I’m going to express this repression towards The Decent-If-I’m-Being-Generous Lord.

I can’t think of a better way to get my Absentee Heavenly Father’s attention than recreating my favorite Bible story, The Tower of Babel. Now, I can’t actually touch Bibles, silver, or garlic for some reason, but I’ve read the SparkNotes version and I feel confident enough to sum it up. All the world’s people spoke one language and gathered to build a tower so high it could reach Heaven, and God got furious… omnipotence has a few blind spots, apparently, did He not see this coming? He scattered the people across the land and made them speak different languages, to halt such sinful communication and ensure future high schoolers would have to take an extra elective.

A million dollars worth of scantily-clad independent contractors should be able to draw up some blueprints and start construction quick. It’s not about average IQ, it’s about total IQ, they’ll figure something out. I’m a cool boss, they can talk between themselves and take smoke breaks, who cares if they babble on while I get my Babel on to Babylon?

I can see it now. I sit atop the tower, on a throne of my own. Construction keeps it slowly raising, ever higher, ever upward. The clouds clear and I hear angels singing. I’m moments from seeing God, finally, I’ll demand His respect and be recognized as a good and worthy creation of His. He won’t miss any more of my theater troupe’s winter solstices. Maybe we’ll play catch.

I’ll look upon my Holy Maker and open my mouth to speak.