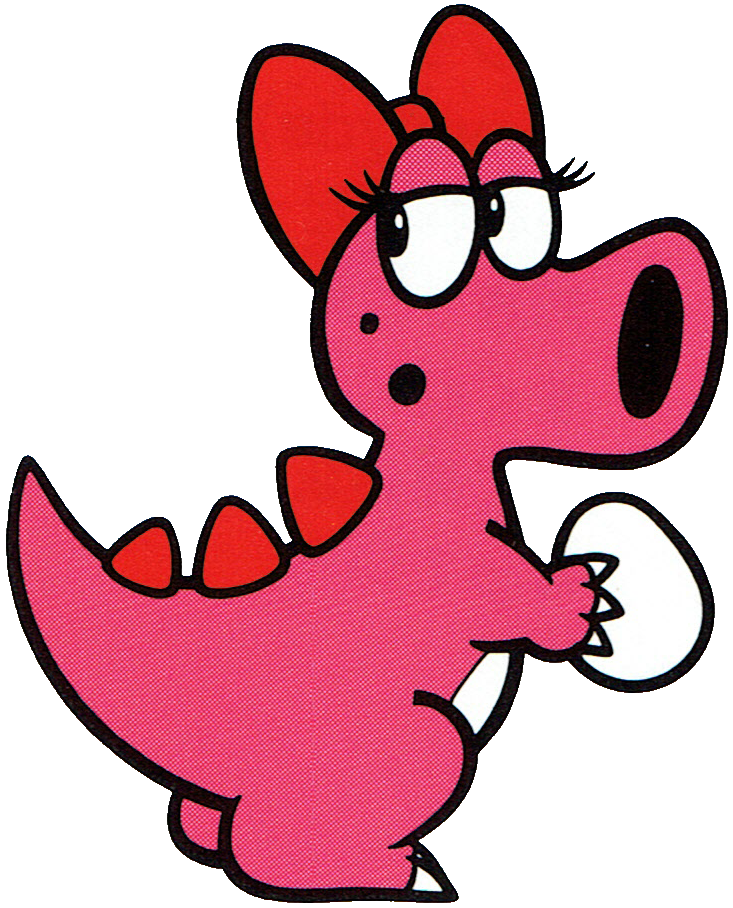 The character known as Birdo in the West is a strange dinosaur-looking creature with a big hole for both mouth and nose which she uses to shoot eggs from. While often referred to as a singular entity, there are apparently multiples of the species with different colorations, as seen in Super Mario Bros. 2 (USA) and Mario Power Tennis. It’s possible, that like Yoshi and Toad, Birdo is the name of both the character and the species, though this is never elaborated on. She’s a relatively minor character in the larger Super Mario canon, appearing here and there, sometimes as a mini-boss and a playable character in a Mario Party or a Mario Kart. She seems to have reached her zenith in terms of playability in the GameCube/Wii era, since after the Wii her appearances (especially playable ones) have diminished noticeably. She is also possibly the very first transgender character in video games.

In the manual for the American version of Super Mario Bros. 2 it says this in Birdo’s blurb: “He thinks he is a girl and he spits eggs from his mouth. He’d rather be called “birdetta.” Now obviously, from a modern perspective this is an extremely transphobic, but the game was released in 1988. The science and understanding of gender and gender identity has improved vastly since then. I think it’s pretty easy to take something like this, which on its own is decently problematic, and turn it around into a fun piece of modern inclusivity. The character Birdo, as represented in the newer titles, is considered a woman (at least in the States), where games pretty unanimously refer to her with female pronouns. On top of that, she appeared on the “Women of Driving” sign in Mario Kart 8, alongside Princess Peach and Princess Daisy. That seems to be a definitive stance. What I also like about Birdo is that she aesthetically fits very well into the rest of the Mario-verse; she isn’t overly sexualized in any way like many other ostensibly trans characters are (looking at you, Poison), while still exuding femininity and her confidence in it.

Despite all this, you might have spotted the problem: Birdo is her deadname. She’d rather be called Birdetta, the apparently feminine version of the name Birdo. Despite the fact that Nintendo seemingly considers her to be a woman, the only name she is called in-universe and out is Birdo. Seriously, if I were to call her Birdetta, I doubt many people would know who I’m talking about. Birdo is just her name, and that’s the issue. As far as we know, canonically, Birdo doesn’t want to be called such, and yet everyone still does. It’s the most regressive thing about the character, at least in modern contexts. So what should Nintendo do to rectify the situation? I have three possible options:

I understand that the name of one fictional minor character in a video game franchise doesn’t seem like a particularly important thing to be concerned about. In the grand scheme of things, with all the tragedy and awfulness going on in the world, what does it matter what a pink, bow-wearing dino creature has as a name? And honestly, yeah, compared to things like climate change I suppose it isn’t. But people play Mario games because they want to have fun. They want to escape to a fanciful world where everybody is happy, and the day is always saved by a plumber. It’s a place to escape from many of the problems the world has, which I believe is necessary in one’s life to stay sane. For both trans people and their allies, seeing someone who should be representative of the community constantly referred to as their deadname is a stark reminder of the hatred the real world provides, in what should be light fun. Making an extremely easy change can make a world of difference to those who struggle with being accepted for who they are, and to me, I think that’s worth it.

Nintendo: Do Something About Birdo’s Name, Please.